As usual, Bruce will be impeccably attired for UFC 258 on February 13 in Las Vegas in a custom smoking jacket by King & Bay.

This is your first look at Bruce's look for UFC 258 – a stunning red silk jacquard smoking jacket with a very unique custom lining. The fabric was specifically chosen to help Bruce make a stand-out statement on Valentines weekend. We think it works nicely!

To commemorate Bruce Buffer’s 25th Anniversary, the design team at King & Bay’s created a custom lining showcasing Bruce in his signature smoking jackets at different UFC events throughout his career.

To properly capture Bruce’s larger than life personality and his charisma, we channeled his inner superhero by creating a graphic story of his adventures. The result is Bruce in his true element thrilling fans in the octagon all over the world.

From the lining, we have designed 5 Commemorative Limited Edition Pocket Rounds depicting Bruce at different UFC fights over his career. There are only 250 of each available... so we suggest you purchase yours today!

25% of the price will be donated to the Cancer Research Institute in Bruce's name.

Get Your Limited Edition Bruce Buffer Pocket Round.

A Bit About The Matches

With a robust undercard and the UFC Welterweight Championship belt up for grabs, this Saturday night's fights will deliver an action-filled octagon from start to finish.

The main card starts with a middleweight match between Kelvin Gastelum and Ian Heinisch, both hoping to move up from their #9 and #15 ranking respectively.

Prior to the title fight there will be women’s flyweight division tilt featuring Maycee Barber, coming back from injury, vs. Alexa Grasso. With a win, Barber will be looking for a future title bout.

The main event will feature the reigning welterweight champ, Kamaru Usman against challenger Gilbert Burns. This is a meeting originally scheduled twice previously, and both fighters are now in top form and ready to contest for the belt.

Get Set to Watch Bruce's Style in Action. 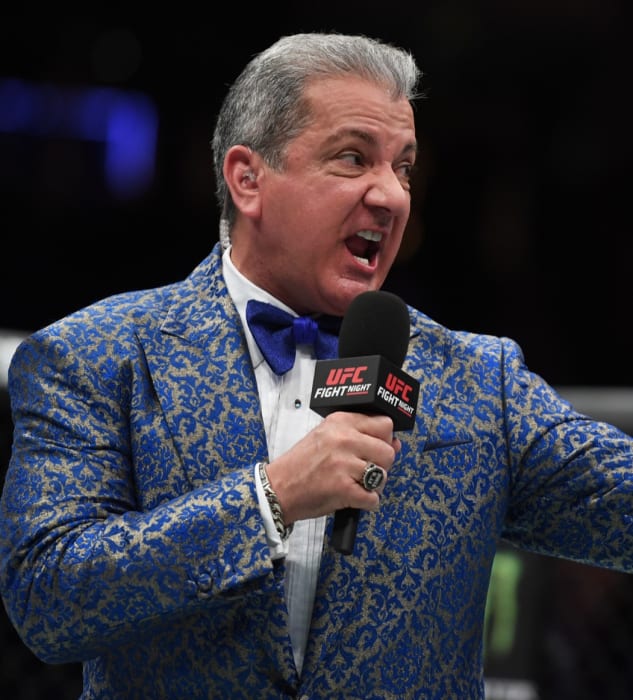 « Give the Gift of Style |  Book An Appointment »