"It's a challenge trying to top each jacket, to be honest, but it is fun," says Aashif Jamani of King & Bay 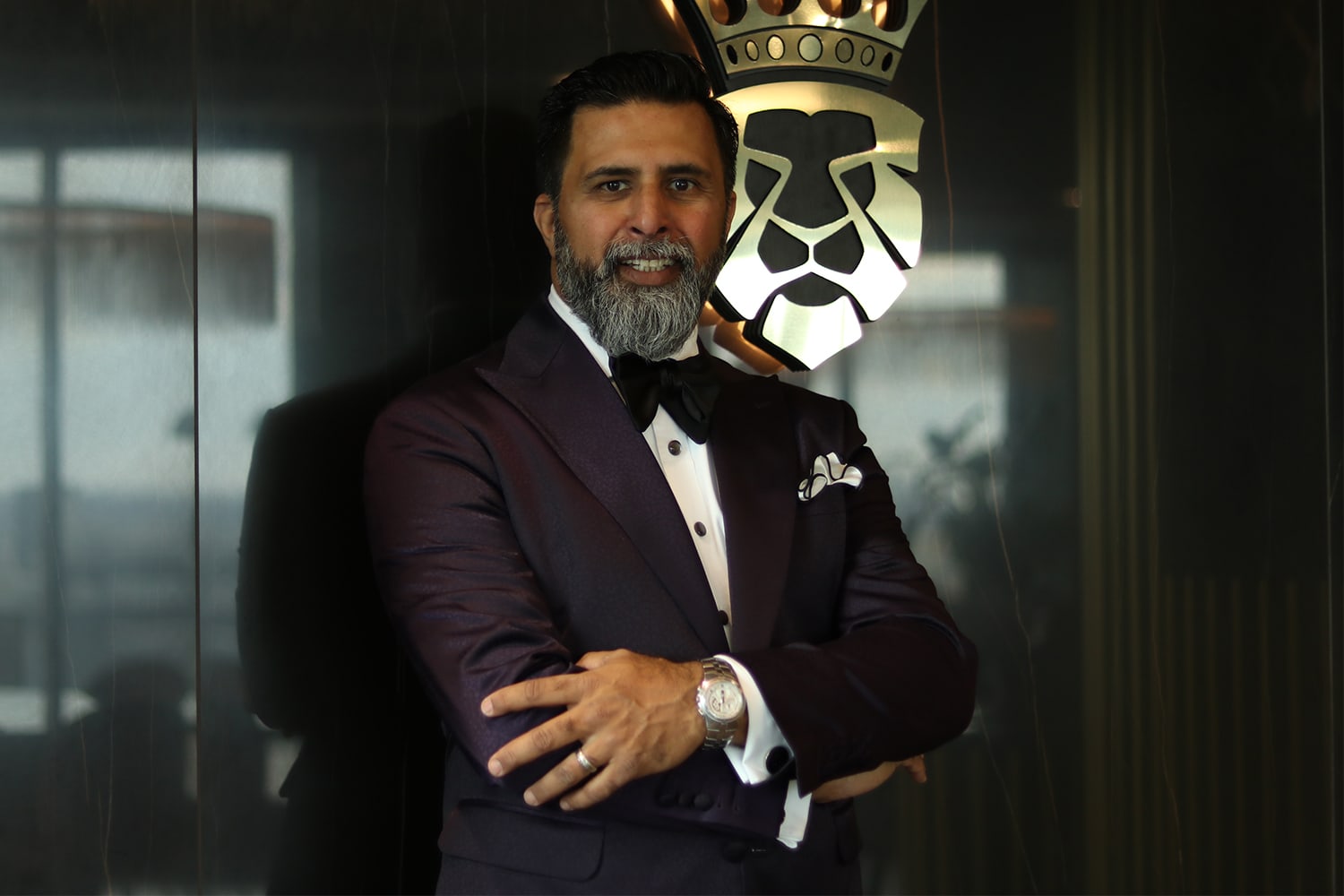 Flush with contract cash and endorsement deals, their often lavish sartorial choices are daily fodder for national style columns and curated Instagram accounts alike. Here at InsideHook, we’ve covered everything from Tom Brady’s Super Bowl jacket to Conor McGregor’s million-dollar watches, and have to admit that sports stars — thanks to their obligation to stay in shape — also have the ability to pull off fits that would look goofy on most people, like LeBron James rocking a bare chest with a double gold chain.

Bruce Buffer apparently didn’t get the memo. Celebrating his 25th anniversary as the voice of the UFC this year, the 63-year-old announcer has come to be known not just for the booming voice that’s built his career, but also the increasingly audacious costumery that often overshadows that of the fighters he introduces. When MMA fans drop $70 to watch pay-per-views, they want to know two things: who’s going to get knocked out, and what Bruce Buffer’s going to wear next.

Eccentric smoking jackets are the star of his ensembles, with purple velvet peak lapels and emerald green florals — un-pull-off-able by most menswear standards — simply being par for the course. The designs are notable not simply because the silk jacquard fabric offers a genteel contrast to the blood stains and energy drink logos festooning the cage where Buffer does his work, but because they differ from the staid black-and-white tuxedos of his predecessors, and we mean that literally.

Michael Buffer, Bruce’s half-brother, is a legendary boxing and wrestling MC who coined the catchphrase “Let’s get ready to rumble!” If Michael’s monochromatic suits and composed demeanor represent an old era of combat sports, Bruce’s flamboyant plumage and athletic delivery represent the future.

“It’s a challenge trying to top each jacket, to be honest, but it is fun,” Aashif Jamani tells InsideHook. He’s the director of sales for King & Bay, the Toronto menswear boutique that has been dressing Buffer for UFC events for the past five years. We dialed up Jamani before UFC 261 this Saturday to talk about his client growing into a bonafide trendsetter, his favorite bespoke designs they’ve created for Buffer over the years, and how you too can pull off a fight night-worthy smoking jacket.

GO TO INSIDE HOOK

Dress Like Bruce With His Limited Edition Pocket Rounds

InsideHook: Can you tell me what your day-to-day job is like at King & Bay?

Aashif Jamani: Our business is very different from say the regular retail store since we operate a private lounge — it’s very much like a speakeasy. If you don’t know where it is, you’re never going to find it. My role, aside from driving personal sales, driving the team sales, is making sure that they’re providing customers with the best experience. What’s different about King & Bay is that we’re not just focused on clothing. Clothing is the end result, but we’re actually looking to impart knowledge to the client, making sure whatever needs that they have in terms of their wardrobe are addressed, but we also do it on a one-to-one personalized basis.

Since we’re an appointment-only company, everything is a personal service. When you come in, you’re greeted, we always offer drinks, it’s like you’re coming into our home. We have some signature cocktails that we make. We have our own signature Old-Fashioned with our own spiced syrup that we make, so it’s not like something you’re going to find in any bar or anywhere else. 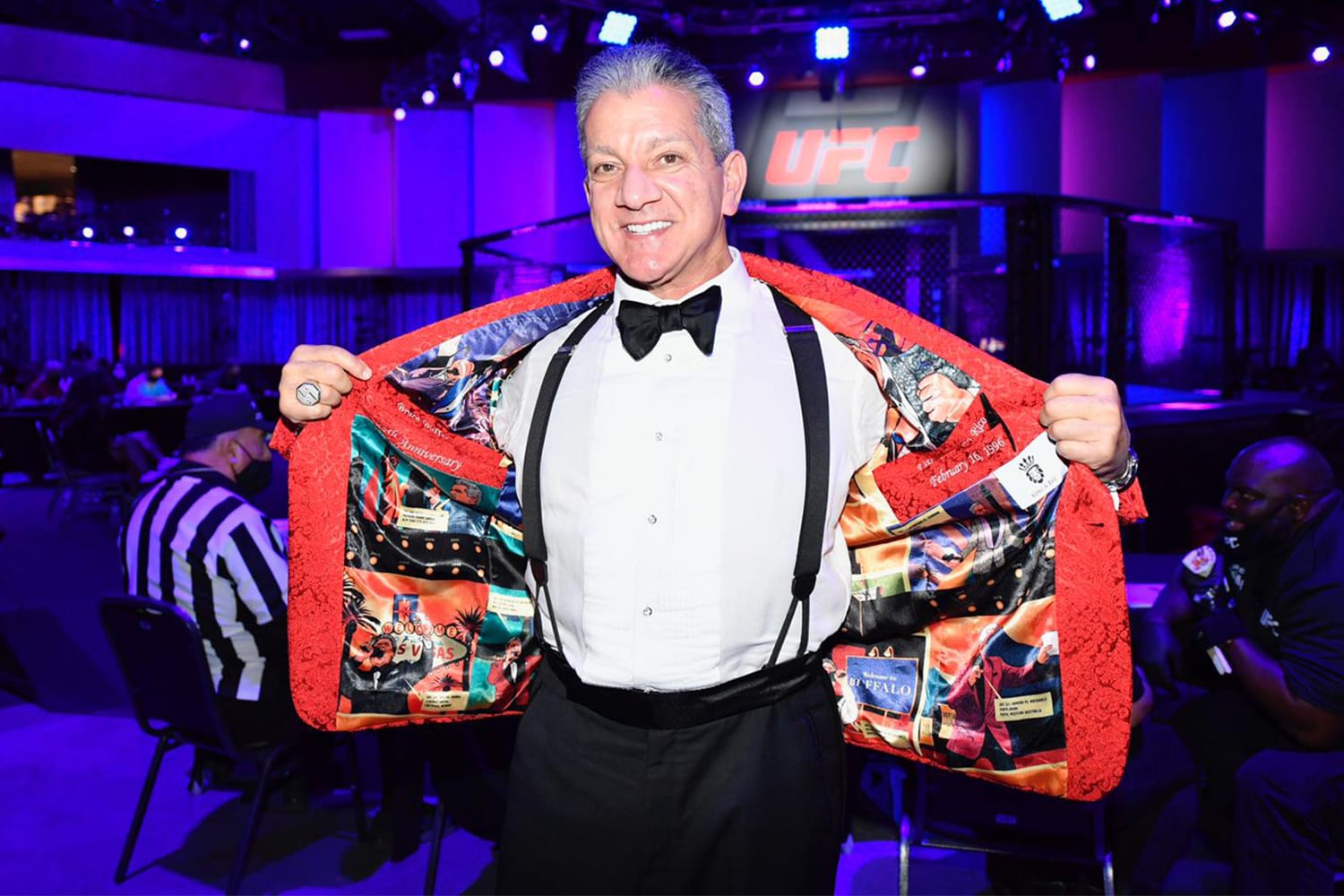 When did your relationship with Bruce Buffer start?

We started with Bruce five years ago at UFC 200 in Vegas, and that was actually a very signature event, because in July in Vegas it’s always one of their top bouts, they always have big cards. We actually did two jackets for Bruce for that fight, where for the main event he actually did a jacket change, which had never been done before. Bruce’s style is to be avant-garde, to always create a show. He puts a lot of time and energy into what he does. He’s very serious, very professional, he has a very high standard of executing, and the same thing goes for his image. We were able to convince him, “Hey, look, we could actually help in that area.” And to his credit, we started off, and he got a ton of a ton of love on that first event and it’s been building since then.

Since he has his own sense of style that he’s bringing to this, when you’re creating a jacket, what is that process like? Does he come in with ideas, do you show him a bunch of fabrics? How does it work?

We would show him fabrics, and we would then have him make the decision. That’s how we first started. And then as we built up trust and a relationship, we had a little bit more leeway to introduce certain outfits to him. We do both. For UFC 254, we actually did a special promo where we did an Instagram Live where we went through the process, and we had a contest where we had an opportunity for a fan to get the second jacket, because there were only two available. A lot of the stuff Bruce wears, there’s only either one or two available.

The fabrics are so limited, and we only work with him in that regard, sometimes to our detriment, because somebody will want [the same] jacket and we won’t have it. So that is the beauty and uniqueness of Bruce, because he is unique in the sports arena. He dresses well. And especially for this year as well being his 25th anniversary, we have some special garments; he’s really gone all out getting a jacket every fight, and we made a custom lining for him which celebrates that. I don’t know if you’ve even had a chance to see that?

No, I haven’t seen the lining yet.

We created a custom lining based on the jackets we’ve made for him in the last five years and the different cities he’s been in. It’s really cool.

You’ve mentioned a couple noteworthy styles. Do you have any favorite Buffer jackets from over the years?

Yeah, for sure, there’s a couple. When there was, I guess, probably the biggest fight in the UFC, which was Conor McGregor versus Khabib [Nurmagomedov], we had a special lining for that fight. We actually had two jackets for that fight, and on the jacket [lining], one side had Khabib and the other side had McGregor. That jacket fabric was amazing. And obviously the big one we did for his 25th anniversary in February, the red jacket with the lining. We’re putting this custom lining in all of his new jackets for this year as a commemoration, and we actually have pocket rounds.

« Give the Gift of Style |  Book An Appointment »