Looking for a Virtual Meeting solution with a touch of sophistication? Talk to us.

Legendary ring announcers Bruce and Michael Buffer share more than their family name and an occupation. They also share an elegant sense of style and a taste for custom clothing. 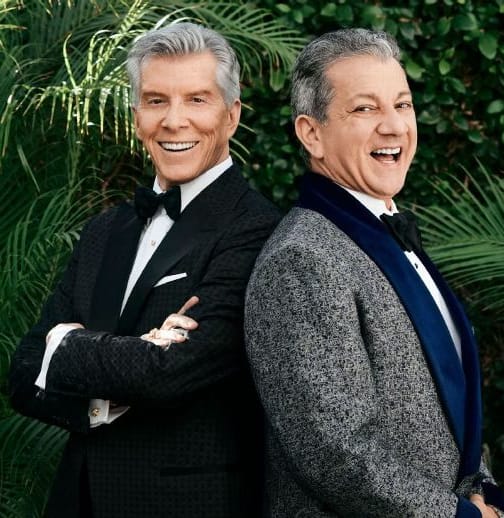 Bruce Buffer was watching a boxing event with his father when he first laid his eyes on legendary boxing announcer, Michael Buffer.

"He was so different than the other ring announcers," Bruce tells ESPN. "Very handsome, debonair-looking. Had the tuxedo with, like, this James Bond flair. I was fascinated because I thought, 'What a cool job that is!’”

Bruce had no idea he was watching his half-brother.

Though they didn't meet until they were adults, the Buffer brothers quickly grew comfortable with more family. Fast forward a couple of decades, and Bruce and Michael are more than brothers and business partners.

They're both legendary ring announcers of their respective combat sport — and they look great doing it.

It’s an astounding story, but it's true.

Bruce Develops His Own 007 Style

After 20 years of announcing UFC, Bruce has become a sports legend in his own right with a classic style all his own.

His home is a monument to his obsession with the Sean Connery and Roger Moore era 007 films.

These days, when Bruce wants to display his own Bond flair, he turns to King & Bay.

Since 2016, we’ve been creating custom smoking jackets for Bruce to wear for each of his UFC main events. We’re proud to be Bruce’s go-to custom men’s clothier.

And King & Bay is Proud to Dress Him

Read about the incredible true story of Bruce and Michael Buffer on ESPN.com ›

Bruce sets new standards for looking good in the ring ›

NEO Exchange, a senior stock exchange that seeks to elevate every detail in the client experience, supports Mission2Mask

We recently had the pleasure of working with NEO, a bold and disruptive capital markets fintech company based in Toronto, through our Mission2Masks program.

As Ontario enters the first stage of re-openings, the King & Bay Reusable Face Mask offers protection for you and your staff.

King & Bay receives special thank you for our efforts through Mission2Mask

Workplaces are beginning to re-open, and the King & Bay Reusable Face Mask provides an option to keep you and your staff protected.

The Story Behind the Mission2Mask Initiative

Looking good while doing good in our community is one of our guiding principals. With Mission2Mask, we're continuing our involvement with the fight against COVID-19.

Opt-in to our eNews to receive regular updates with mens style trends, design tips and information about upcoming events.

You can always opt-out at any time. Need more info? Give us a shout.